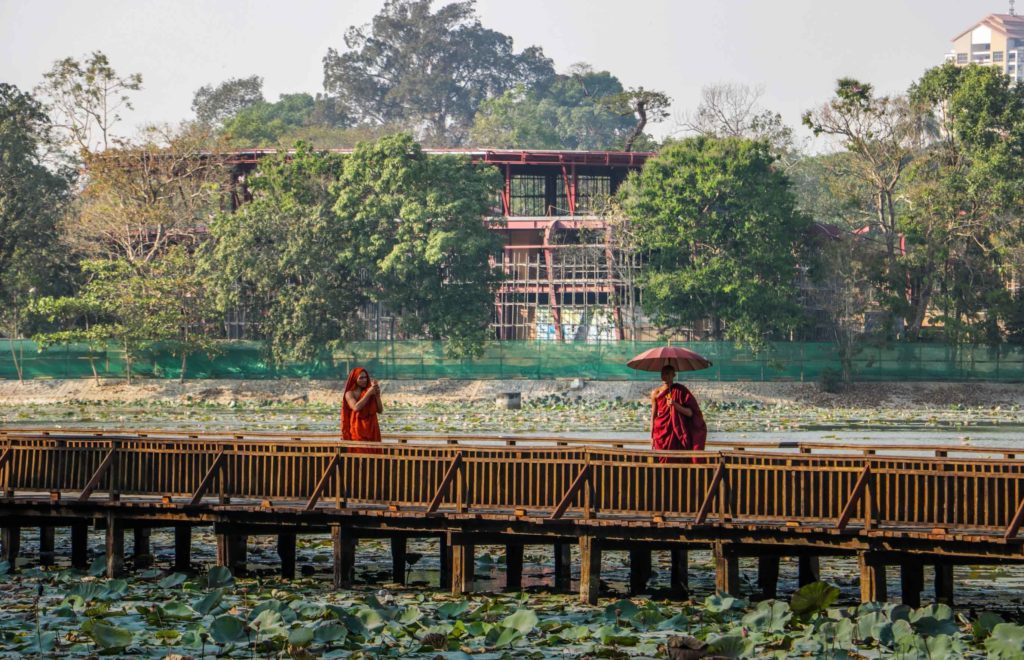 Yangon roots go back from many centuries, Built on the site of the ancient Mon city of Dagon found 2000 years ago, it lies along the Rangoon River and it is one of the country major ports. The little fishing village was given the name Yangon (end of Strife) by King Alaungpaya following his conquest of the Mon Kingdom of Pegu in 1757 and was renamed Rangoon in 1886 by the British when Burma was annexed.

The colonial past is still to be seen in the layout of city organized as a chessboard with many old Victorian buildings to survive in different states of preservation.

The population reaches nearly 6 million with a wide variety of cultures and religions. Buddhist Pagodas stand together with Hindu temples, mosques and churches. Many Indian and Chinese have settled in Yangon during the past century running business and living in their own quarters.

The very famous Shwedagon Pagoda is of course the most venerable and impressive monument to stand over Yangon from its green hill.

Rising 99 meters (326 feet) on the top of the holly Thainguttara Hill and erected more than 2500 years ago, The Shwedagon Pagoda enshrines eight hairs of the Buddha placed in a treasure chamber under its based and is the highest symbol of Myanmar people’s devotion to Buddha. An estimated 60 tons of gold is thought to adorn the pagoda. In addition, on top of the stupa is an umbrella (hti) which is believed to contain more than 7000 diamonds, rubies and sapphires.

The Sule Pagoda stands in the heart of the city, in the middle of a roundabout. It is no proper records when it was built, but it is believed that the pagoda was built 2000 years ago. The earlier name was Kyauk A-thote and it was probably built by Mon kings during the 14th century.

Next to the Sule pagoda is the Mahabandoola park, which contains the Independence monument, a large obelisk.

The original ancient pagoda was destroyed during the 2nd worldwide war. A replica was rebuilt in place and relics from the treasure chamber re-enshrined. It is the only pagoda where to walk along a spiraling corridor into the innermost part of the spire and see the relic chamber inside. Corridors are lined with glass mosaic.

This Pagoda features a reclining Buddha 70 meters long in the pose of rest. Opposite to Kyauktagyi is Ngathagyi with its crowned seated image. Around Ngathagyi are beautiful monasteries. One of them is called 100 Pillars Monastery built by 100 tree pillars.

The Roman Catholic Saint Mary’s Cathedral is the biggest in Myanmar built up in 1899 by the Dutch designer Joe Cuypers. The interior of the cathedral still contains some decoration items of church furniture but as suffered from Cyclone Nargis in 2008 when most of its windows were badly damaged.

Many old colonial buildings making the charm of Yangon still stand in the heart of Yangon. Most of them reflect both Western and Easter architectural styles. The best way to feel the variety of architecture styles is a good walking tour in the heart of the city along Strand Road and Pasodan Street.

Yangon is also famous for its colorful and lively markets. The most famous one is Bogyoke Aung San Market original named Scott Market when built in 1926 by Municipal Commissioner Gavin Scott. The market was renamed following the independence in 1948 in honor of Bogyoke Aung San. The complex houses hundreds of small stalls where local people use to buy jewelry, tailor made clothes, eat noodles. It is also a good place for tourists to find Burmese handicrafts.

In the city center are also worth to visit Konzedan Market in the Indian market with its range of different spices but also to walk in China town, especially between Latha and Lanmadaw Streets in the evening along the stalls to line up in Mahabandoola Street.

An interesting fruits and vegetables market in Kamayut Township is Hledan market to visit in the morning giving a lively and colorful experience.

Yangon has grown up around two natural lakes, Kandawgyi and Inya Lakes. The Kandawgyi Lake offers a peaceful retreat to walk along a wooden bridge with a breathtaking view on the Shwedagon. The lake is also home of a royal barge modeled on the image of the Karaweik, Sanskrit for Garuda, the legendary bird mount of the Hindu God Vishnu.