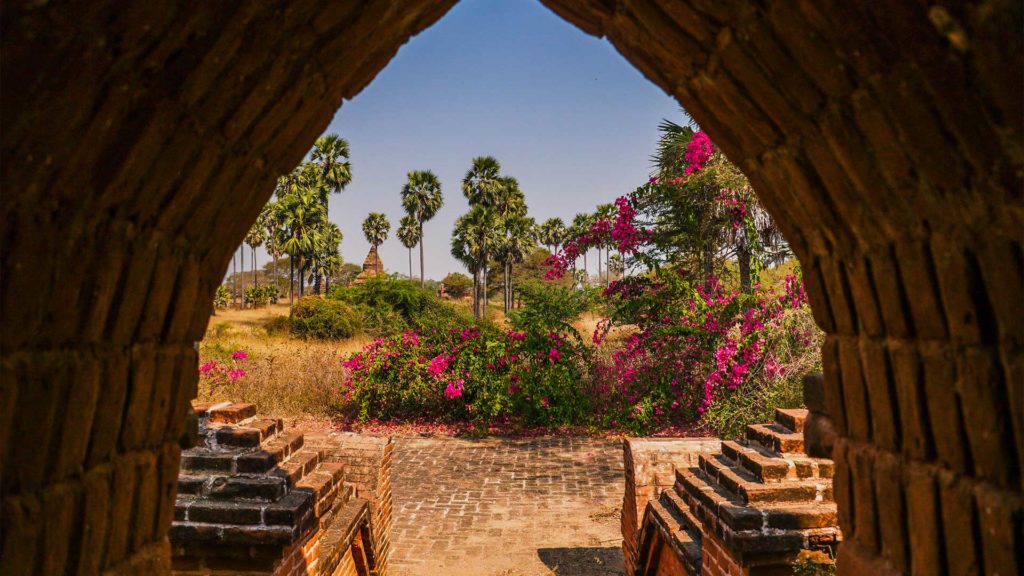 Whichever the way to approach by air or by boat, the view of the 2 200 temples and pagodas in the savannah landscape is memorable. Nowhere in the world can be find a comparable density of sacred buildings making Pagan one of the most archeological and cultural sites in South East Asia with the temples complex of Angkor Wat. Most of the temples were built during the 11th and 13th centuries initiated under King Anawratha when he ascended to the throne in 1044. Pagan developed into a powerful Kingdom with a population estimated to half million during the 12th century. Weakened by the number of the building projects, the kingdom could not show resistance against the invasion of the Shan and the Mongols, Pagan capitulated in 1287.

The Ananda Patho or Paya remains one of the finest and most beautiful of all Bagan Architectural complex. It was badly damage in the earthquake of 1975 and carefully restored. The temple was completed during the reign of King Kyanzittha (1084-1113). The perfectly proportioned masterpiece contains 4 massive standing Buddha facing the 4 cardinal directions. The Ananda pagoda Festival is one of the most famous festival held during the days of Payatho in December/January to raise money for upkeep of the temple. It brings thousands of people from all parts of Myanmar.

The Htilominlo Pahto was built by King Nandaungmya from 1211 to 1230 early in his reign to commemorate his selection on this spot as crown prince from among five sons of the king. The white umbrella had tilted toward him, and he became his father’s successor. The Htilominlo is a large three story red brick temple on a low platform. Some of its exquisite finely detailed plaster still remains. The temple is similar in design to the earlier Sulamani Pahto and the Gawdawpalin both built by the king’s father. Buddhas face the four cardinal points on the each of the two shrine stories. There are fine murals to remain on the interior walls.

The Dhammayangyi (or Dhamma-yan-gyi) Pahto is Bagan’s most massive shrine. It probably was built by King Narathu between 1167 and 1170. Yet some have attributed it to Narathu’s father and predecessor, Sithu I, who also built Thatbyinnyu. The Dhammayangyi, similar in its ground plan similar to the Greek Cross of the earlier Ananda Pahto, is a very large square single story pyramidal temple with six monumental ascending exterior terraces. The brickwork is finely craft, perhaps it is the finest in Bagan. Narathu reportedly would execute masons if he could stick a pin between the bricks. Because of the death of the builder, the temple was never finished. The Dhammayangyi remains one of the most unique and intriguing constructions on the Bagan plain.

Named after Upali, a well-known monk, this ordination hall was built in the mid-13th century. Most buildings of this type were made of wood and disappeared long time ago. Inside there are some brightly painted frescoes on the walls and ceilings from the late 17th and early 18th centuries.
The building is usually kept locked in order to protect the paintings. The Upali Thein was renovated during the reign of the Konbaung Dynasty in 1794 and 1795.

Mingalazedi marks both the highpoint and the end of major temple construction at Bagan. It was completed just ten years before the kingdom’s collapse at the hands of the Mongols in 1287. The temple is the first and only temple built with a full set of Jakata plaques since the Dhammayazika in 1196. The temple was sponsored by King Narathihapati (1255/6-1287), known to later ages as Tayokpyemin. The layout of the temple differs notably from its predecessors. Instead of the usual stupas or sikharas found at the corners of the terraces, there are narrow obelisks at each of the levels. Mingalarzedi’s uppermost terrace is one of the highest points now accessible to visitors offering a good spot for a panoramic sunset view of all the monuments lying to the east.

The Shwezigon Paya is one of the Bagan area’s and Myanmar’s, most significant religious structures located at the edge of the most important regional town of Nyaung Oo. It served as a prototype for many later stupas built throughout Myanmar. The Shwezigon is also a major national center of worship. Pilgrims come from many parts of Myanmar for its festival held during the Burmese month of Nadaw (November/December). The Shwezigon was also the first pagoda to allow ‘nat’ images (pre-Buddhist spirits who had the power to do good or evil) within its walls. Its original builder, King Anawrahta (. 1044-1077) converted to Theravada Buddhism in the mid-11th century had a profound influence on Bagan’s religious and cultural life and was first of the great builders of Bagan. He began construction of the Shwezigon as a massive and centrally reliquary shrine to encase a variety of Buddha artifacts, including a copy of the Tooth of Kandy from Ceylon, and an emerald Buddha image from China. After Anawrahta death in 1077, the reliquary shrine was completed between 1086 and 1090 by King Kyanzittha (1084-1113), Anawrahta’s probable son. Kyanzittha was perhaps Bagan’s greatest king, and it was under him that Bagan became known.

It is the tallest building in Pagan raising 61 meters. It was built by King Alaungsithu in the middle 12th century and its monumental scale helps it to stand out from older temples. Thatbyinnyu consists of two clearly separate blocks with two rows of windows to make it brighter and airier.

The Gawdawpalin Temple was built by King Narapatisithu after building the Sulamani Temple at the 11th century. But the king did not complete the construction. It was completed by his son Htilominlo with a structure common to the Sulamani temple.

Gawdawpalin is counted as one of the largest shrines of Bagan. The temple is a double-storey temple in the late style. Its platform is square with porticoes on all four sides, but with the eastern portico projecting further than the others. In the ground storey, a corridor runs around a central block against whose four sides are placed images of the Buddha.