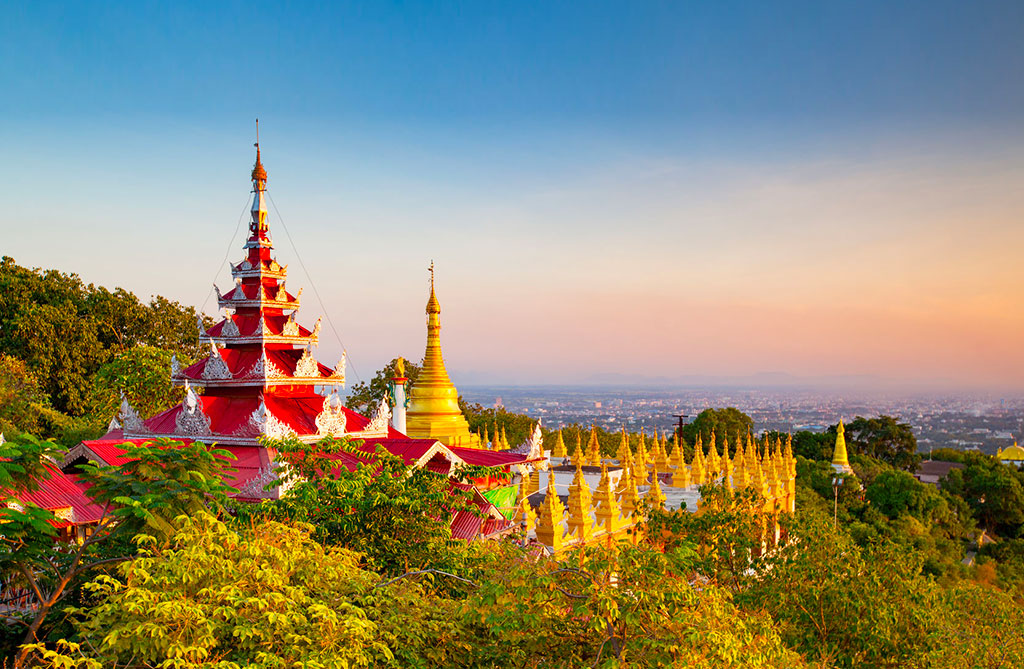 Mandalay, the second largest city is considered as the cultural heart of Myanmar. Mandalay was founded in 1857 by King Mindom, and a year later, it replaced Amarapura as the capital. The city has a great historical importance with buildings as the Royal Palace, the Mahamuni pagoda but also well known for its craft industry like wood, marble, bronze carving or production of Marionettes. With an accessible access on the Irrawaddy and close to China, Mandalay has become an economic trade centre.

It is one of the most important pagodas with Shwedagon pagoda and Kyaiktiyo build by King Bodawpaya in 1794.
The famous Mahamuni Buddha stands in the centre of the shrine and over the years, the pilgrims have covered it with gold leaf which makes now difficult to recognize some parts of the body. The layer of gold at some part of the body is several centimeters tick.
Every morning at 4am, monks wash the face of the Mahamuni Buddha and even brush its teeth

The Royal palace is another main site of Interest in Mandalay. It was built by King Mindom in 1897. Covering an area of 4 square kilometers, it is situated in the centre of Mandalay and stands as a witness of the final years of the Burmese Kingdom. The palace was destroyed by fire during the Second World War and was rebuilt with modern material instead of teak wood as it was originally built. Many people look at this renovation as not properly done.

Mandalay Hill offers a superb panoramic view over the city, the Irrawaddy, Mingun and the pagoda covered-hills of Sagaing. The top of the 236 meters high hill can be reached by the 1729 steps of the covered southern stairway with its magnificent guardian chinthe (half-lion, half-dragon). Before to reach the top, a standing Buddha is pointing his arm towards the palace, the Mandalay’s foundation as per the fulfillment of the Buddha prophecy according to the legend.

The Kuthodaw Paya contains what often is called the world’s largest book. It is a large walled complex built by King Mindon.
The stupa is set in the middle of a thirteen acre field of 729 pagodas. Each shrine contains a marble slab, inscribed on both sides with the Pali script text of a portion of the Tipitaka, Theravada Buddhism’s sacred texts. Taken together, they contain the entire text of the Tipitaka and thus form “the world’s largest book.” The work of carving began in October 1860 and carvers completed their task in May 1869.

Mingun is located on the western bank of the river Ayeyarwaddy, approximately 7 miles north of Mandalay. It is reached by ferryboats across the river and takes around one hour. A boat trip to Mingun is pleasant to observe the busy life on the river. The massive ruins of Mantara Gyi Pagoda, also known as Mingun Pagoda, can be seen from distance while crossing the Irrawaddy.

It was built by King Bodawpaya to be the biggest pagoda in the world and was originally supposed to reach 150 meters. 20 years later after the start of the construction in 1790, an earthquake badly damaged the construction and the pagoda’s height remained at 50 meters which makes the monument still spectacular. It is possible to climb up till the top and enjoy a magnificent view over the Irrawaddy and Mandalay.

With a height of nearly 4 meters and a diameter of 5 meters, it said to be the largest hanging belt in the world. Weighing 90 tons, the Mingun bell was cast in bronze in 1808 and once complete, the master craftsman was executed in order to stop him to reproduce anything similar.

The impressive pagoda was built by King Bagyidaw, a grandson of Bodawpaya in 1816 in memory of his favorite wife. The unusual architecture is inspired from the Sulamani Pagoda on the top of the mythical golden mount Meru, the centre of the universe in Buddhist-Hindu cosmology.

Ava was the capital of the Burmese Kingdom for more than 400 years. Founded by the Shan Prince Thadominbya in 1364 on a man-made island between the Irrawaddy and Myint Nge rivers, Ava lost several times its status as Royal capital before Amarapura became the capital in 1841. Due to the earthquake in 1838, very little remains from the royal buildings.

Sagaing is the capital of Sagaing Region in Myanmar. Located on the Ayeyarwady River, 20 km to the southwest of Mandalay on the opposite bank of the river, Sagaing with numerous Buddhist monasteries is an important religious and monastic center. The pagodas and monasteries crowd the numerous hills running parallel to the river. The central pagoda, Soon U Ponya Shin Pagoda, is connected by a set of covered staircases that run up the 240 m hill. Sagaing was the capital of Sagaing Kingdom (1315–1364), one of the minor kingdoms that rose up after the fall of Pagan dynasty. During the Ava period (1364–1555), the city was the common fief of the crown prince or senior princes. The city briefly became the royal capital between 1760 and 1763 in the reign of King Naungdawgyi.